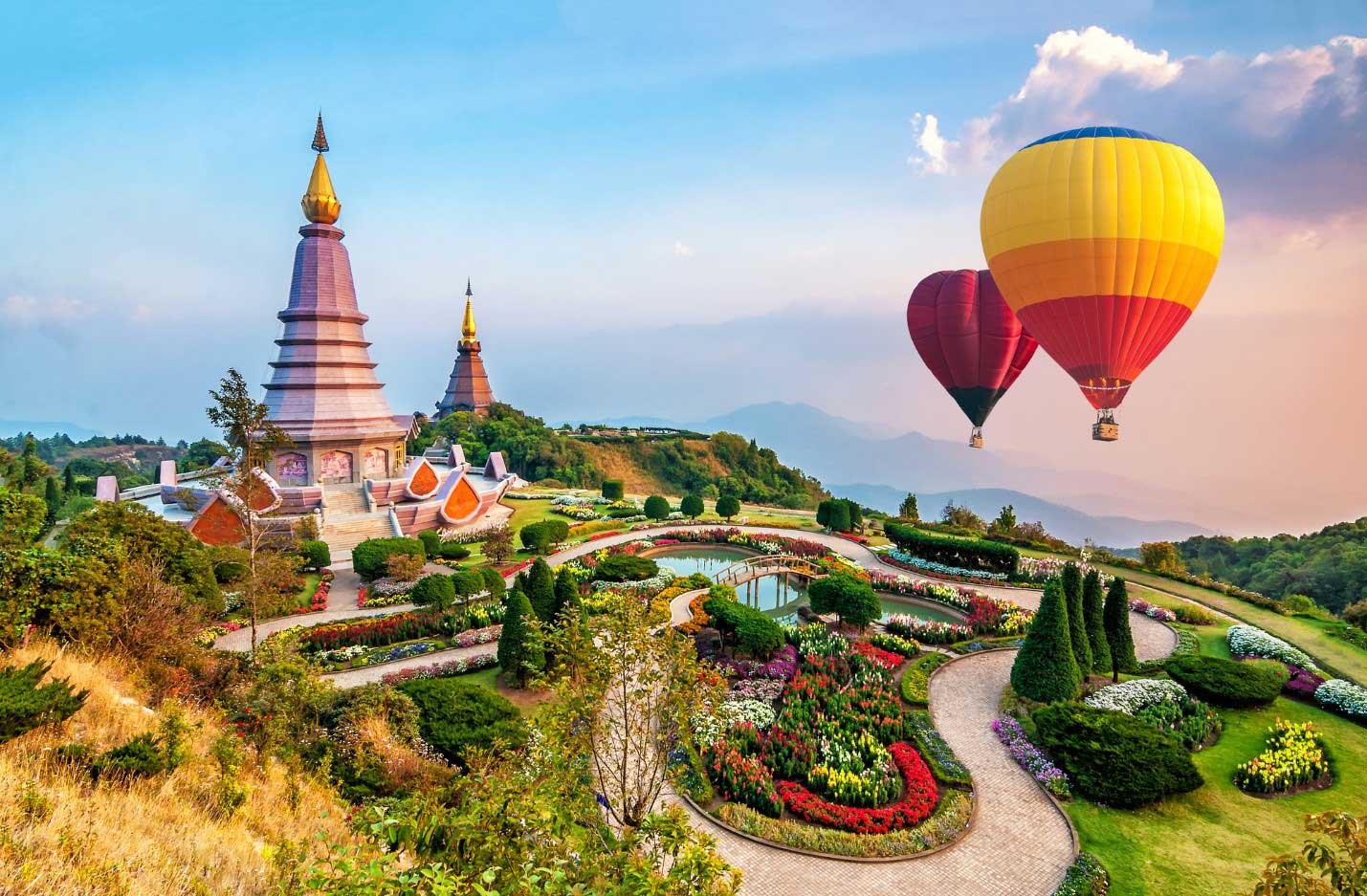 Chiang Mai is a land of misty mountains and colourful hill tribes, a playground for seasoned travellers, a paradise for shoppers and a delight for adventurers. On a trip to Chiang Mai, the curious traveller can expand their horizons with Thai massage and cooking courses.

Others will be bowled over by the variety of handicrafts and antiques. The wild child will find plenty of lively nightlife, and the epicure can indulge in wonderful cuisine. Despite its relatively small size, Chiang Mai truly has it all.

Chiang Mai province is in Northern Thailand. The Chiang Mai weather is always cooler than the rest of the country, with an average temperature of 25°C throughout the year. The city has plethora of things to see and things to do. The beauty of the mountains, hill tribe villages, and botanical gardens attracts millions of tourists to Chiang Mai every year. You can also enjoy a Zoo and Aquarium, a nocturnal zoo, and classic Northern Thai temples and architecture which are a Fusion of Lanna, Mon, and Burmese styles.

The west is next to Amphoe Pai, Amphoe Mueang Mae Hong Son, Amphoe Khun Yuam, Amphoe Mae La Noi, Amphoe Mae Sariang, and Amphoe Sob Moei of Mae Hong Son Province. Most popular places are Amphoe Pai, Pang Oung, and Doi Mae U-kho.
Chiang Mai has a long History. It was once the capital of the Lanna Kingdom. Nowadays it is a very modern city, similar to Bangkok.

Chiang Mai literally means “new city” and has retained the name despite celebrating its 700th anniversary in 1996. King Meng Rai the Great founded the city as the capital of the Lanna Kingdom on Thursday, April 12, 1296 around the same time as the establishment of the Sukhothai Kingdom. King Meng Rai even conferred with his friends, King Ramkhamhaeng of Sukhothai and King Ngam Muang of Phayao before choosing the site where the capital of the Lanna Kingdom was to be founded. Henceforth, Chiang Mai not only became the capital and cultural core of the Lanna Kingdom, it was also to be the center of Buddhism in northern Thailand. King Meng Rai himself was a very religious leader who even founded many of the city’s temples that remain important to this day. Chiang Mai is one of the few places in Thailand where it is possible to experience both Historical and modern Thai Culture coexisting side by side: the city features centuries-old pagodas and temples next to modern convenience stores and boutique hotels. This dichotomy is best appreciated within the moat-encircled old city, which retains much of the fortified wall that once protected the city center as well as the four main gates that provided access to the former Lanna capital city. Strangely, for many years, tourists had mistaken Chiang Mai simply as the base from which they could plan Trekking and Rafting trips to hill tribe villages and explore other provinces. Once in Chiang Mai, however, tourists are surprised by the fact that there are so many things to discover other than its beautiful and historic temples. Intriguing diversity among ethnic tribes, a number of elephant camps, many cooking and massage schools, numerous outdoor activities, a variety of handicrafts workshops, various cultural performances, and breathtaking scenery make Chiang Mai one of Asia’s most attractive tourist destinations. The phrase "a day in Chiang Mai is enough to see things around town" was once a common expression. Today, two weeks in Chiang Mai may not be long enough for travelers to experience all that Chiang Mai has to offer.

The old city of Chiang Mai is a showcase of the north’s fascinating indigenous cultural identity that includes diverse dialects, a delectable cuisine, distinctive architecture, traditional values, lively festivals, numerous handicrafts workshops, northern style massage, and classical dances. Chiang Mai is also blessed with pristine natural resources including mountains, waterfalls, and Rivers. The presence of numerous hill tribes that feature a wealth of unique cultures enhances Chiang Mai’s distinctive diversity. Hill tribe trekking often combined with river rafting and elephant riding has always been one of Chiang Mai’s greatest tourist attractions. Nowadays there are innumerable activities and attractions both in the city and the surrounding province, including massage instruction and golf. Moreover, visitors can visit workshops where they can learn about the production of silk or silver, and purchase memorable, hand-crafted souvenirs. With such a diverse range of attractions and an equally grand selection of dining and accommodation options, Chiang Mai is a place where both backpackers and luxury tourists can enjoy the ultimate Thailand holiday.