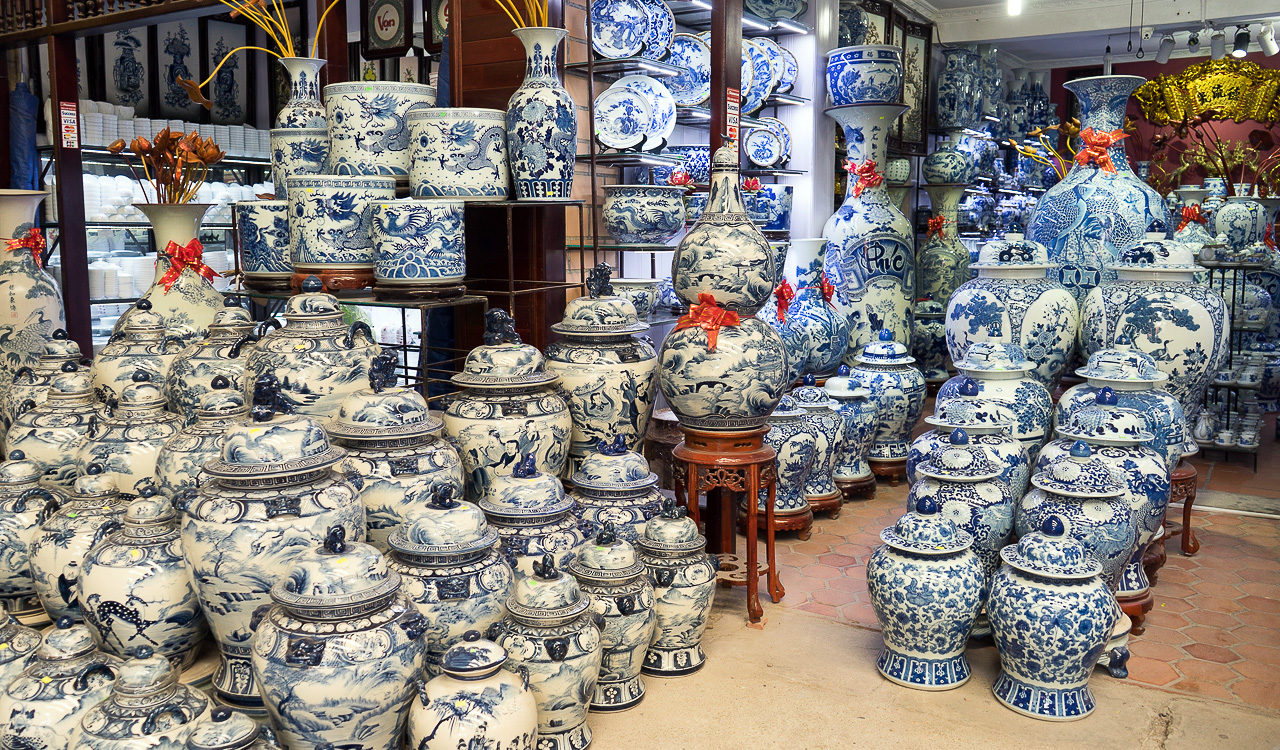 Bat Trang Ceramics Village is a 14th century porcelain and pottery village near Hanoi, housing local artisans who combine both traditional and modern techniques to create beautiful porcelain artworks. Not only are you able to purchase some of the finest handmade ceramic products in Vietnam, you can also see them made right before your eyes during your visit.

Characteristic: This is a pottery village with a half-millenary historic development.
Some decades recently, the vitality of this village is still blown up by the thousands of pottery-kiln on fire day and night.

In the period about 12th - 14th century, there are a numbers of families in Bo Bat Pottery Village (in Thanh Hoa Province now). They were Bui, Phung, Tran and Vu families coming there to work pottery, selling it to people in city even doing business with foreigners. At first, it was called Bach Ho Group and when there are the thousands of pottery-kiln, it was called Bat Trang - the age of name is as approximately old as the age of group.

Who was the Bat Trang pottery ancestor? As a popular documentary he is Hua Vinh Kieu who gained a pupil scholar certificate under the reign of Ly. On the occasion of being sent to the north country under the Sung Dynasty ( China today) as King's envoy, he learnt work and taught to people when he came back. He was regarded as the founder. But according to the "Dao Tuong Kinh Su Bi Ky" epitaph, Tran Hoe Doctor in Tu Chi built it. Quy duke, Nguyen Thanh Chau, in 1737. He was the founder. On the other theories, Luu Phuong was said to be the founder...

When it was seen on the Dai Viet administrative map, Bat Trang products were got the favor of people from the top citizen class in Thang Long to the poor peasant in country. Bat Trang family use items gone far abroad. From the early 15th century, China was the place with the tradition pottery work for the thousands of years and well known in the world but there were ever the tens of Bat Trang pottery sets in the tribute festival. Since then in every reign, in decline or prospect situations, Bat Trang Pottery Village still assured the worth of goods, kept position and passed every trial. It is proud of working, living, old origin in Bat Trang.

In the Gia Lam proverb, there is a word: "living to be man in Bat Trang, dying to be tutelary spirit" that means it is very happy to be a man in Bat Trang because of the stable pottery work, big fortune. In Kieu Ki Village, there was a work of making Indian ink; material was the skin of buffalo. They had to kill buffalo and worship tutelary spirit so this tutelary was well off. Bat Trang likes a symbol of Vietnam traditional trade village.

It is a famous trade village, recently, there are over 6,000 people in 1,500 families with the total 153ha. The rate of pottery kiln in Bat Trang is the first rank at the other same villages in the world. Most men in Bat Trang follow the traditional work (nine of ten) except for person leaving home. After over an innovation decade, many traditional trade villages are recovered, the innovation and increase of Bat Trang Pottery Village are increasing unbelievably.

On the basic of tradition pottery technique, Bat Trang pottery workers have taken - abused-propagated greatly the progress of science technology into every stage in making pottery. It has made many types of top class pottery, that is useful and beautiful and it upgrades the sense of pottery art. The Bat Trang list of pottery getting high quality is longer more and more by day like bowl, dish, pot, cup, wine pot, a big flower-vase, leg lamp, lime-pot, big-bellied jar... It made by all sort of glazes as ancient pearl blaze, crackle glaze, dark glaze, indigo-blue flower glaze, grey flower glaze, melt glaze...

In 10/2004, Bat Trang Pottery Market was opened in the area of over 5.000m2. It is not only the place to display and trade but also an interesting tourist site in Ha Noi.