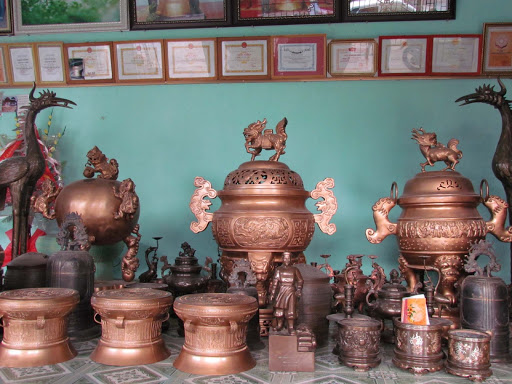 The village of Ngu Xa appears as a small peninsula near the Truc Bach Lake. It's where many sophisticated bronze products were produced for the needs of the ancient capital of Thang Long.

Ngu Xa means five villages. According to history, during the Le Dynasty (1428 - 1527), people of the 5 villages Dong Mai, Chau My, Long Thuong, Dien Tien and Dao Vien (from Hung Yen and Bac Ninh provinces), who were skillful at bronze casting, had migrated to the capital to establish a casting workshop for business. They settled here and set up a new village in the capital and named it Ngu Xa to remember their five original villages. Afterwards they reorganized into a separate professional guild called Ngu Xa bronze-casting guild. Nowadays Ngu Xa Street is still there to the east of the Truc Bach Lake, in Ba Dinh District.

Despite living in the capital, the bronze casters of Ngu Xa always maintained their rural practices, building a pagoda for their Buddhist worship and a communal house dedicated to the originator of bronze casting, Bonze Khong Lo.

Ngu Xa really represents the talent of Vietnamese bronze casters. Their products over the last 500 years have become outstanding masterpieces of national art.

Among the most famous products of Ngu Xa bronze casters are bronze bells and statues. Bronze bells are very popular, and can be found in every Vietnamese pagoda. They are special musical instruments, which give an echoing sound when ringing as the thickness of each part of the bell differs. Every step of the casting procedure, from shaping the mould to preparing the mixture and melting and pouring it into the mould must follow a special strict process, requiring a peculiar know how. Bronze statues are the other famous product of Ngu Xa. One typical example is the Buddha statue cast in 1952 and placed in Thien Quang Pagoda right in this village.

The statue is in a cross-legged sitting position; the design is simple but harmonious. It is 3.95m high, the distance between the two knees is 3.60m, its perimeter is 11.6m and the whole statue weighs 10 tons and sits on a throne of 96 lotus petals. The lotus throne is also made of bronze weighing 1.6 tons.

This is a grandiose piece of bronze art work, typical and sophisticated in all aspects, acting as symbol of the techniques and art of bronze casting in Vietnam. The Buddha's face is benevolent and calm, his stature, sitting with folded robes expresses an inner deep calmness. Yet he seems also very close to a human being. This illustrates the Vietnamese concept of life, as well as the tradition of Buddhist carving.

The great works of the ancestors from this village include not only the Buddha Statue, but also many other famous works, considered to be Vietnamese master-pieces, such as the Tran Vo Statue in Quan Thanh Temple and various bronze relics such as incense-burners, lamps and cranes, all considered to be valuable antiques.