About The Imperial Citadel of Thang Long Hanoi 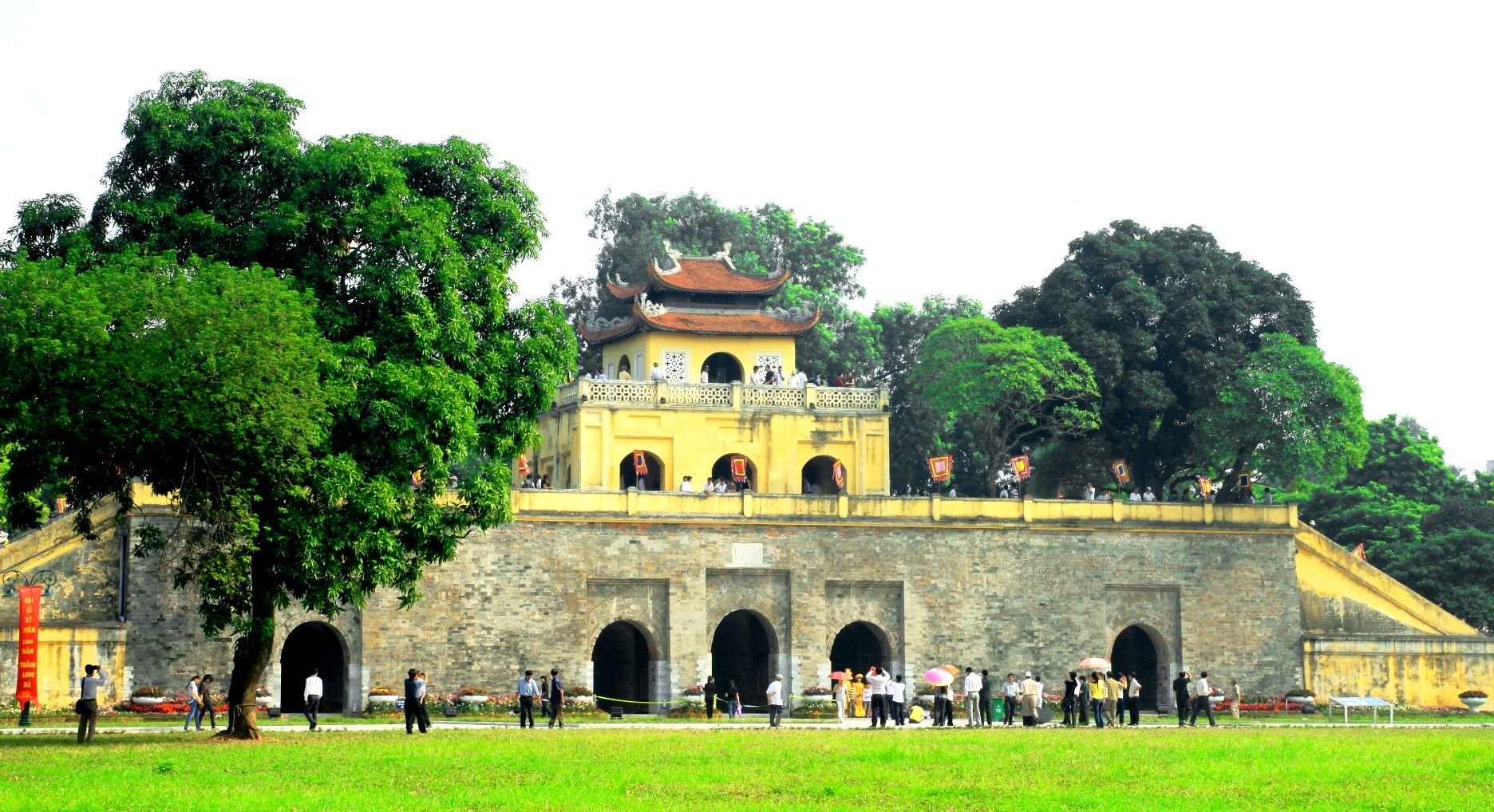 As the capital city of Vietnam under the Ly, Tran and Le dynasties, it houses a great deal of priceless cultural-historical relics of the ancient Thang Long imperial citadel. It was recognized as a world cultural heritage site by the UNESCO in August, 2010.

The ancient Thang Long citadel was encircled by three incorporated forts. The smallest and most inner enclosure was Tu Cam Thanh (Forbidden City) where the king, queens and concubines lived in seclusion. The area was called by different names by different dynasties, including Cung Thanh (under the Ly dynasty), Long Phuong Thanh (under the Tran dynasty) and Cam Thanh (under the Le dynasty). Tu Cam Thanh was entered by a single gate called Doan Mon (the main gate). The second fort (the middle ring) was Hoang Thanh (imperial citadel), where the royal court, offices and residence of mandarins were located. Under the Ly, Tran and Le dynasties, Hoang Thanh was entered by four entrances, entailing Tuong Phu to the east, Quang Phuc to the west, Dai Hung to the south and Dieu Duc to the north. Under the Nguyen dynasty, the capital city was transferred to Hue in the central region.

King Gia Long then ordered the demolition of walls surrounding the ancient Thang Long citadel reasoning that it only acted as Tran Bac Thanh (the northern defensive fortification) and requested the building of a new, smaller citadel called Ha Noi citadel. Hoang Thanh had five entrances - the eastern, western, northern, south-western and north-eastern. At present, only the northern gate (Bac Mon) remains at Phan Dinh Phung street. The outer fort was Kinh Thanh (imperial city), where the general public lived. Surrounded by the Hong, To Lich and Kim Nguu rivers, Kinh Thanh acted as a dyke system for the capital city. Under the Le dynasty, Thang Long citadel was entered by 16 gates, which was reduced to 12 under the Nguyen dynasty. In early 20th century, there were only five entrances, including Cho Dua, Dong Mac, Cau Den, Cau Giay and Quan Chuong. At present, there remains only Quan Chuong gate (formerly called Dong Ha Mon, meaning a river gate to the east).

Though having survived to the age of over 1,000 years, the ancient majestic of many palaces of Thang Long citadel has no longer existed. However, relics and artefacts excavated from the site have somehow helped revive the former appearance of Thang Long and provided an insight into the existence and evolvement of the land of an ascending dragon over the past 10 centuries.

Doan Mon was the only gate to Tu Cam Thanh. It overlooks south - the most important direction in traditional architectural works, especially ancient structures, according to the Vietnamese people. Under the Nguyen dynasty, Doan Mon was upgraded to have two more side entrances. In 1998, the Ministry of Defence handed over the Doan Mon relic, which covers a total land area of 3,681.5 sq. m, to the Hanoi People's Committee. The relic site has been open to the public since October, 2001.

Bac Mon remains the only entrance to Hanoi Citadel under the Nguyen dynasty. It lies on Phan Dinh Phung street. Embedded in the outer wall of Bac Mon is a stone board carved with the date April, 25, 1882, and marks of two cannon balls fired by the French troops during their distance attack targeted the citadel from the Hong (Red) river. Two wooden doors of Bac Mon has already been restored with each measuring 12 sq. m in size. The doors weigh about 16 tones and slide on copper wheels weighed approximately 80kg. Above the citadel gate sits a shrine dedicated to Governor Nguyen Tri Phuong and his successor Hoang Dieu, who led Hanoians to defeat the French colonialists' attacks twice.

Dragon House was built on the site of Kinh Thien palace by the French colonialists in 1886. Kinh Thien palace was in the heart of Thang Long imperial citadel. It was located on Long Do (the naval of the dragon) mountain, which was regarded as the vital point of the ancient Thang Long citadel. In 1010 after settling in Thang Long capital city, King Ly Thai To ordered the building of a central chamber for the capital city on top of Long Do mountain and called it Can Nguyen palace, where the most important royal rituals were held. In 1029, King Ly Thai Tong commanded his men to construct a central chamber called Thien An on the site of Can Nguyen palace. Thien An palace was then renamed Kinh Thien palace under the Le dynasty. When the capital city was moved to Hue in the central region under the Nguyen dynasty, Kinh Thien palace became the out-of-town palace for the kings and mandarins of the Nguyen when they visited the north. In 1886, the French colonialists demolished the out-of-town Kinh Thien palace and built the two-storey seven-room dragon house which acted as a command office of the French artillery. Since the Vietnamese army took the control of the capital city in 1954, the dragon house has become the headquarters of the Vietnam People's Army.

Hau Lau (also called Tinh Bac pavilion) was located behind the out-of-town Kinh Thien palace and it currently lies on Hoang Dieu Street. Hau Lau stood north to safeguard peace for the Kinh Thien palace in accordance with the principle of Feng Shui so it acquired the name Tinh Bac Lau or Hau Lau (a pavilion in the back). It was also called the pavilion of princess given it provided accommodations for concubines accompanying King Nguyen during his business trips to the north. Hau Lau was destroyed in 1870 and it was then rebuilt into a military camp for the French troops. At present, Hau Lau acts as a showcase room exhibiting artefacts excavated from the surrounding area in October 1998, and photos portraying Hanoi through different historical stages.

Archaeological site at 18 Hoang Dieu is about 87 meters from Kinh Thien palace. It houses vestiges of palaces of the Ly, Tran and Le dynasties. The lowest layer of the site was found a part of the eastern area of Dai La citadel under Cao Bien’s reign of the Duong dynasty. The higher layers were reserved for palaces of the Ly and Tran dynasties and a part of the center of the eastern palace of the Ly dynasty. The top layer revealed a part of the centre of Hanoi Citadel in the 19th century. History revealed that Thang Long imperial citadel changed a lot but its centre, especially Tu Cam Thanh, remained nearly unchanged. As architectural structures inside the imperial citadel have been rebuilt and upgraded several times, this explained for the findings of layers of architectural vestiges and artefacts at the archaeological site at 18 Hoang Dieu. Here, archaeologists dug out many important architectural vestiges and a great deal of porcelain and ceramic wares used in the imperial citadel through various stages of development. The findings paved the way for researchers to study ceramics made in Thang Long in general and ceramic wares used in Thang Long imperial citadel through different dynasties.

Flag Tower of Hanoi (also called Ha Noi platform) is located at Dien Bien Phu street. The tower structure was built together with Hanoi Citadel under the Nguyen dynasty (began in early 1805 and completed in 1812). The flag tower is composed of three tiers and a pyramid-shaped tower with the exterior walls imbedded in brick. The tower has a spiral staircase leading to the octagonal top inside it where a flag is hoisted. After the city was liberated on October 10, 1954, the national flag of Vietnam is on top of the tower to welcome visitors.

For its three criteria of age-old historical and cultural values, being the center of regional political power for almost 13 centuries without interruption and diversified relic systems, the Central Sector of the Imperial Citadel of Thang Long - Ha Noi was recognized as a world cultural heritage site by the UNESCO World Heritage Committee on 1st August, 2010. Before that, it was named among the top ten special national relic sites (first batch) in the decision 1272/QD-TTg which the Prime Minister signed on August 12, 2009.